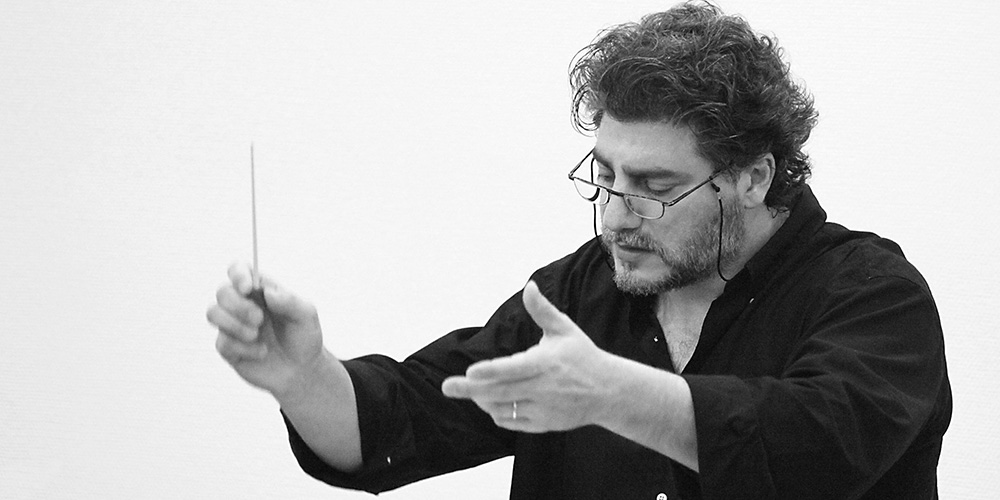 Perhaps Cura, who put conducting among his ambitions early in his
career, will make the path more respectable for singers. Strangely
enough, it may be a singer who wants it all who will prepare the public for
singers who aspire to the podium. That could be a very good thing

José Cura was born to conduct. He debuted, age 15 as a choral director and at 16 he began studies in composition with Carlos Castro and piano with Zulma Cabrera. Born in Rosario, Santa Fe, Argentina, on 5 December 1962, Cura's musical talent matured quickly: at 12 he was playing guitar under Juan di Lorenzo's guidance and in 1982, he entered the Escuela Superior de Arte de la Universidad Nacional de Rosario to continue his musical education in the specialties of composing and conducting. The following year he became assistant conductor for the university choir. At 21, he won a grant for a one year course at the Instituto Superior de Arte del Teatro Colón, where he continued to sing, operas and oratorios in the school choir until 1988, while focusing on enriching his composition and conducting aspirations through the Zirst-hand experience granted by being part of the great Argentinean Coliseum activities. It was during those years that, as an example of his precocity, he Zirst conducted Bach's ‘St. Matthews Passion.’
The progression from innate understanding to sculpting original interpretations has been steady over the decades, even as Cura’s career as an international tenor sensation tended to overshadow his work on the podium. Whether breathing with the singers in opera or concert, providing sensitive readings of delicate compositions or leading an orchestra in soaring symphonic grandeur, Cura never plays it safe. He inhabits the soundscape and claims it as his own.
Cura has always managed to Zind a way to Zit what he loved most into his musical life; a Cura concert may Zind him accompanying himself on stage as he sings (a revolutionary concept when he introduced it but now emulated and more widely accepted) or conducting the orchestra in a wide arrange of intriguing pieces. He was the originator of the  half and half concert: wielding his dark-hued, sensual tenor in song before effortlessly taking to the podium to impeccably shape a symphony. In either role, Cura comes radically alive in the music, sweeping the audience into his universe.