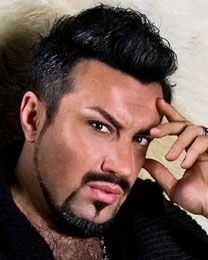 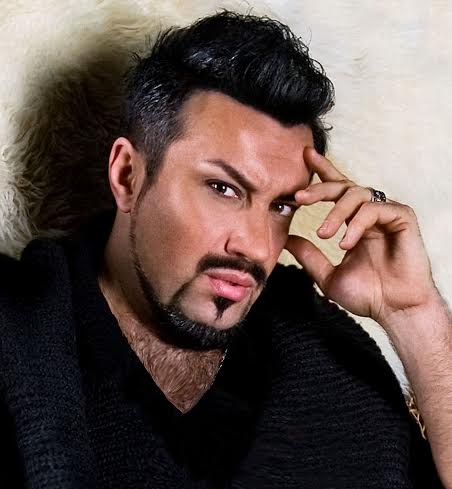 Konstantin Rittel-Kobylianski was born on 7 November 1975 in Kiev, Ukraine, and is currently living in Germany. He stems from a well-known Ukrainian art family (his parents were actors and singers; his great-grandmother was Ukraine’s famous writer Olga Kobylianska).

His solo singing studies: In 2000 he graduated from the Odessa Musical Academy, in 2003 he completed additional solo studies at Freiburg Musical Academy with honours.

During studies in Germany, Konstantin Rittel-Kobylianski received important artistic impulses at Professor Fischer-Dieskau’s Master’s course in Stuttgart, in 1998. In 2001, this baritone cooperated with Hollywood star Sir Peter Ustinov in Switzerland to create a program based on Rachmaninoff’s letters and songs.

In 2003 he debuts as Dottore Malatesta in Donizetti’s opera Don Pasquale at Krefeld Mönchengladbach Opera.

Konstantin is a gladly seen guest in TV talk-shows Bad Ems and Bad Bertrich, and can often be seen on Ukrainian TV (First National TV, 1+1, Inter, TRK Ukraina, ICTV and many other regional TV stations). Since 2006, Konstantin regularly takes part in major opera and concert manifestations in Ukraine. One of them is the Great Formal Christmas solo concert Echoes of the Century at the National opera of Kiev, accompanied by the national symphony orchestra, choir and ballet. He was the guest of honour and participant of the Donetsk gala organized on the occasion of the city anniversary. Konstantin Rittel-Kobylianski was also invited to partake in the gala concert of the International Opera Music Festival at Odessa Opera and the gala of the XII International Opera Festival of Lviv National Opera which was dedicated to 140 years since the birth of S.Krushelnytske.

He is also versatile as a concert singer. Besides opera roles and classical music, his repertoire includes some of the most famous European and American songs. Since 1998 to 2003 he has been working with the Freiburger-Ortenauer-Rock-Symphony Orchestra with which he performed in Strasbourg, Freiburg, Offenburg, Rust, Colmar, Aachen and Basel. Furthermore, Konstantin and this orchestra performed Sympathy for the Devil (by Mick Jagger/Rolling Stones) at the International Tent Music Festival in Freiburg and Breisgau.

In 2007-2008 Konstantin sang in concert with Jelena Obraszowa at Jussupow Palace in St. Petersburg and the main role Lord of Fire for the premiere performance of rock-opera Mysteria by A.Schnitzer at Europa-Park in Rust near Freiburg. In 2011 he was invited to the 20th UNESCO Benefit Gala in Dusseldorf. In 2012 Konstantin sang Pagliacci/Leoncavallo together with Eve Lind during the world premiere of a joint opera performance by circus artists and singers under the great Roncalli circus tent.

During 2013-2014 he performed excerpts from Russian composers’ operas as part of the “Winter in St. Petersburg” program at the Apollo Theatre in Dusseldorf. From 2007 to 2015 he starred in many roles, including Escamillo at Schwerin Opera, Stadttheater Koblenz, Dortmunder Opernhaus, Staatsoper Stuttgart, and the roles of Germont/La Traviata, Scarpia/Tosca, Escamillo/Carmen at the National Opera in Lviv, Ukraine.

Konstantin Rittel-Kobylianski received one of Europe’s most prestigious cultural awards: the European Foundation for Culture Awards-Pro Europe from the European Parliament Cultural Council in Strasburg (other winners of this award include Sir Peter Ustinov, A.S. Mutter, V. Kasarova, M.Rostropowitsch, P. Domingo and others).

He also received the Europäischen W. Semler Musik Kulturpreises award. Together with Patricia Kaas in 2012 he received the title of “Man of the Year” in Kiev and the Medal of St. Sophia in Ukraine. 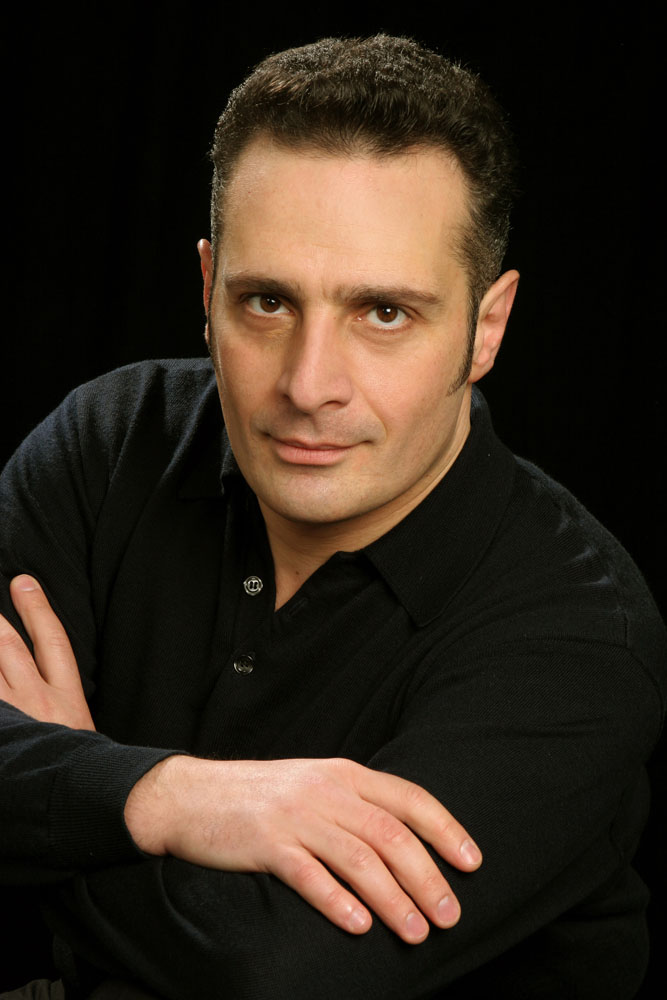 The Armenian-born baritone Mikael Babajanyan completed his vocal and conducting studies at the Yerevan Komitas State Conservatory with outstanding results, and won several national singing competitions. At the Komitas State Conservatory, he was taught by the famous voice professor Arax Davtian. Later he continued his vocal studies in Germany with Tom Krause, Kurt Moll and Kàroly Szilàgyi.

From 1997 to 1999, he conducted the orchestra of the Armenian National Opera Theatre of Yerevan and has sung often times as a soloist at the Armenian Philarmonic Orchestra, where he performed the Fauré Requiem, the Brahms Requiem,  the Mozart Requiem and Rossini's Stabat Mater.

Since 1999 Mikael Babajanyan lives in Germany. His first engagements took him to the theatres of Koblenz, Bielefeld and Giessen, where he performed roles such as Sharpless/Madama Butterfly and Dandini/La Cenerentola. At the State Opera Hanover he performed as Allazim in Mozart's Zaide. Further guest performances lead him to the Grand Théâtre de la Ville in Luxemburg, the Baden State Theatre in Karlsruhe and Bremen Theatre.

From 2002 to 2005 he was a member of the ensemble at Dortmund Theatre, where he sang Belcore/L'elisir d'amore, the title role of Don
Giovanni, Faninal/Der Rosenkavalier, Fernando/Fidelio, Il Conte/Le Nozze di Figaro, Guglielmo/Così fan tutte, Onegin/Eugen Onegin, Schaunard/La Bohème and Sharpless. He also performed regularly at the Mecklenburg State Theatre in Schwerin as Marcello in La Bohème, Ford in Falstaff and Don Giovanni.

By the 2004/2005 season, Mikael Babajanyan has become a highly acclaimed dramatic baritone. A major breakthrough was his much praised debut in 2006/2007 as Iago in Otello at the Bonn Opera, where he gave a year later another successful debut as Yeletzky in Pique Dame. Enthusiastically received by  the press and audiences was also his debut as Francesco in Verdi's I Masnadieri in Munich at Gärtnerplatz Theatre and as Amonasro in Aida at the Savonlinna Opera Festival in Finland (both in 2007/2008). Two years later, he was back at the Savonlinna Opera Festival as Sharpless.

Further guest engagements took him to several foreign opera houses such as the New National Theatre in Tokyo/Japan (Iago), Opera Hong Kong (Germont/La Traviata) and Opéra de Dijon/France (Amonasro/Aida). At the Opéra de Lyon in France he debuted as Drebednyov in Shostakovitch's only operetta Moscow, Cheryomushki. In The Netherlands he performed with the Nederlandse Reisopera in Utrecht (Renato/Un Ballo in Maschera) and in The Hague at the Festival Classique (Alfio//Cavalleria Rusticana). His Austrian debut he made as Vincenzo Gellner in Catalani's opera La Wally at the Klagenfurt City Theatre, where he also performed as Conte di Luna in Il Trovatore.

From 2009 to 2013 the baritone was a member of the ensemble at the Aalto Theatre Essen, where he appeared as Amonasro, Belcore, Francesco, Germont, Marcello, Onegin, Renato, Scarpia/Tosca and Sharpless.

His concert engagements have included the Bartok+Mozart Opera Festival in Miskolc (Hungary), and under Helmuth Rilling he has sung the Messa per Rossini in Stuttgart, at the Rheingau Musik Festival and at the Oregon Bach Festival.

Renato in Un ballo in maschera

Among the singers Mikael Babajanyan was especially impressive. He sang with great vocal elegance a splendiferous Marcello.

Mikael Babajanyan in the role of the unhappy Gellner proves to be an equal partner who is addicted to Wally in self-destructive fervor. The Armenian impressed with a masculine baritone and intense acting.

Francesco Moor in I Masnadieri

As Francesco Moor, Mikael Babajanyan gave a performance that should automatically catapult him into the first tier of Verdi interpreters. His voluminous baritone voice knew no limits, whether in terms of interpretation or of cantilena singing. Here is certainly a singer to be watched!"

You hardly ever experience a Giorgio Germont as Mikael Babajanyan sang him. Drawing on abundant vocal sources, with dramatic aplomb, but differentiating all the same, he achieved a brilliant performance.

Mikael Babajanyan (Iago) surprises from the first tone: a noble-baritone with suppleness, impact and stream; especially impressive in the dream narration.

Fact is that the Iago analysis of the prominent Belcanto-Baritone Mikael Babajanyan in Bonn can already move confidently and self-confident in the opera-olympus of dazzling outstanding villians. The musical conversion succeeds right as rain, perfect in form and still equipped with more extreme, always slight expressivity – altogether a distressing realistic and oppressive character sketch.
--Opernglas, August 2007, B. Kempen Iago is an exquisite theatre sod – sleeky, glibly, diabolical abominable; his Credo does not
drone and therefore it appears the more dangerous. Mikael Babajanyan sings and plays it terrifically.

Mikael Babajanyan makes a terrific role debut. The Armenian Baritone has the required vocal power - his nihilistic “Credo” almost appears frightening - if necessary, he knows how to direct his voice with balmy beauty.

Perhaps the character study would have to be arranged beyond it, to which Mikael Babajanyan tenders his Iago - a psycho in uniform. The Armenian is extreme in everything, also vocally - his variability is enormous. His revenge duet with Otello turned out grand, furthermore the complex choir - soloist - scene in the third act had been very impressive. Great Applause!

Match winner of the evening and a real impact was Mikael Babajanyan as Scarpia. The    Baritone savoured completely his role from the first to the last minute and bestowed his audience continuously with striking moments.
--Opernglas, March 2007, Söhnke Mertens Mikael Babajanyan, to whom the black uniform gives a marvellous consistently appearance
with his black hair and his gimlet black eyes, plays the Scarpia with an unobtrusive trickiness, who abruptly turns from soft features to abysmally fiendishness. Avoiding overstatements he forms his character with a psychological sharp eye and due to that achieving an absorbing impression. And all this with a voice, which is capturing in a tempting manner and suggesting humanity.

The Scarpia of Mikael Babajanyan was minted by self-control and elegance, he lifts his slight Baritone confidently over the orchestra masses.

Mikael Babajanyan as Scarpia is a brutal person right out of the picture book, his singing is a permanent volcanic eruption. A vocal physically complete and an absolute possessive portrait. 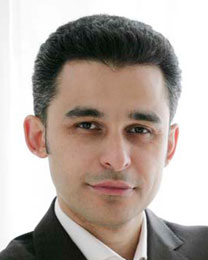 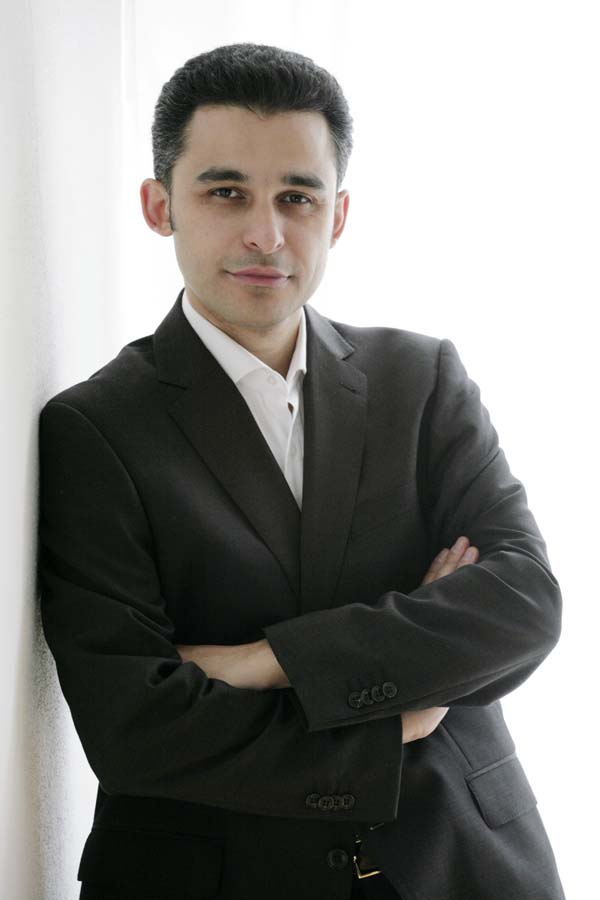 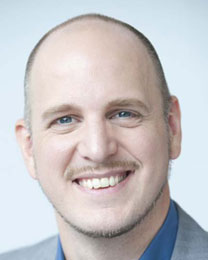 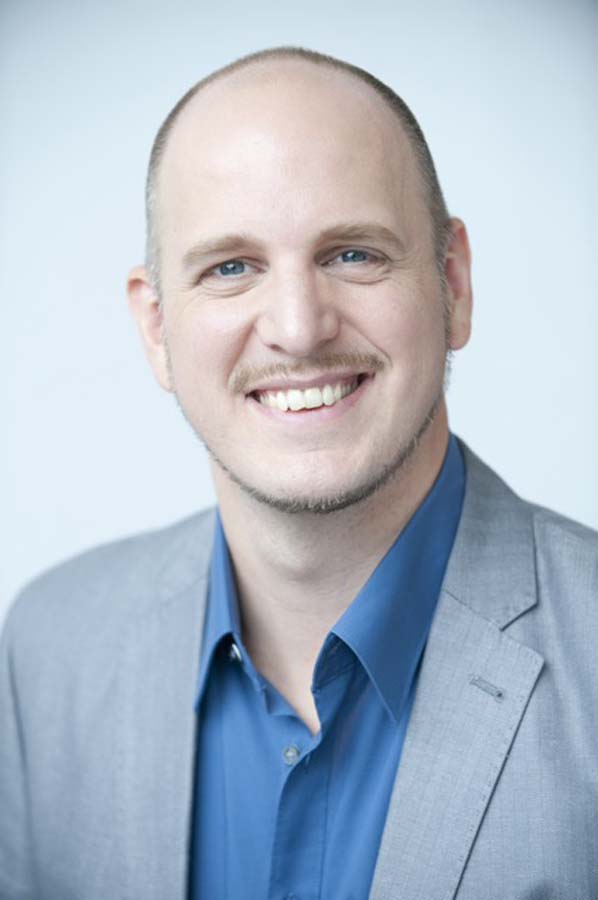 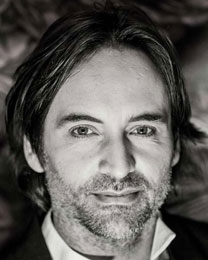 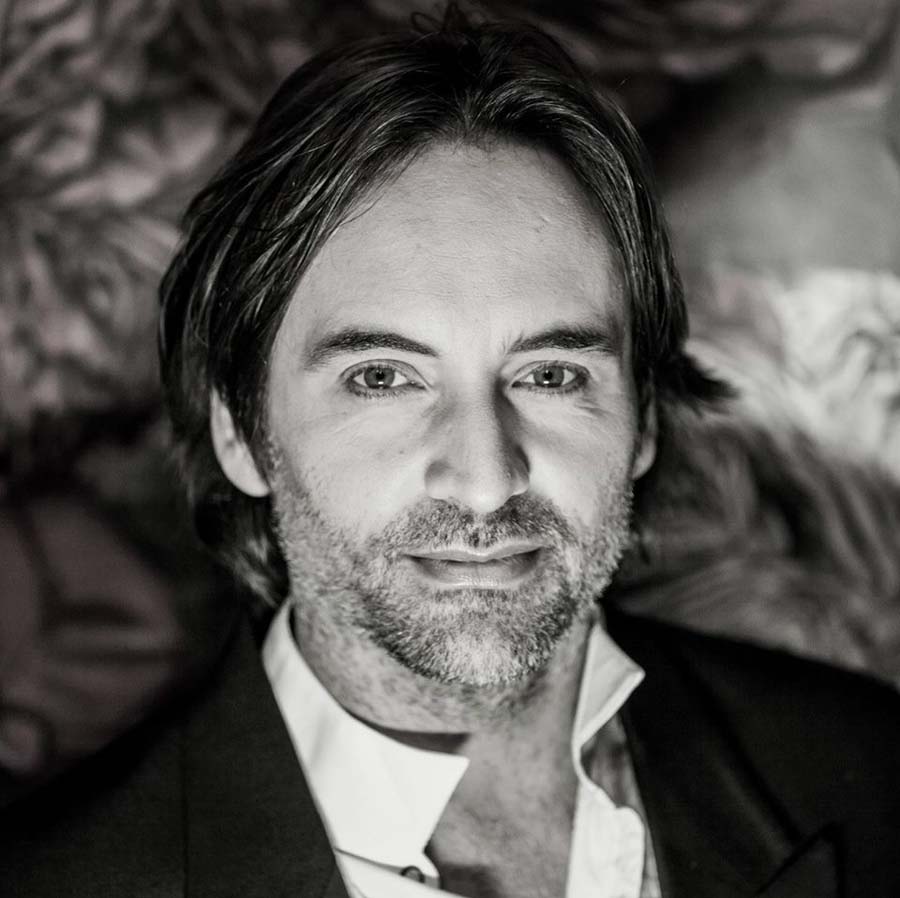 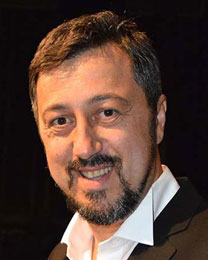 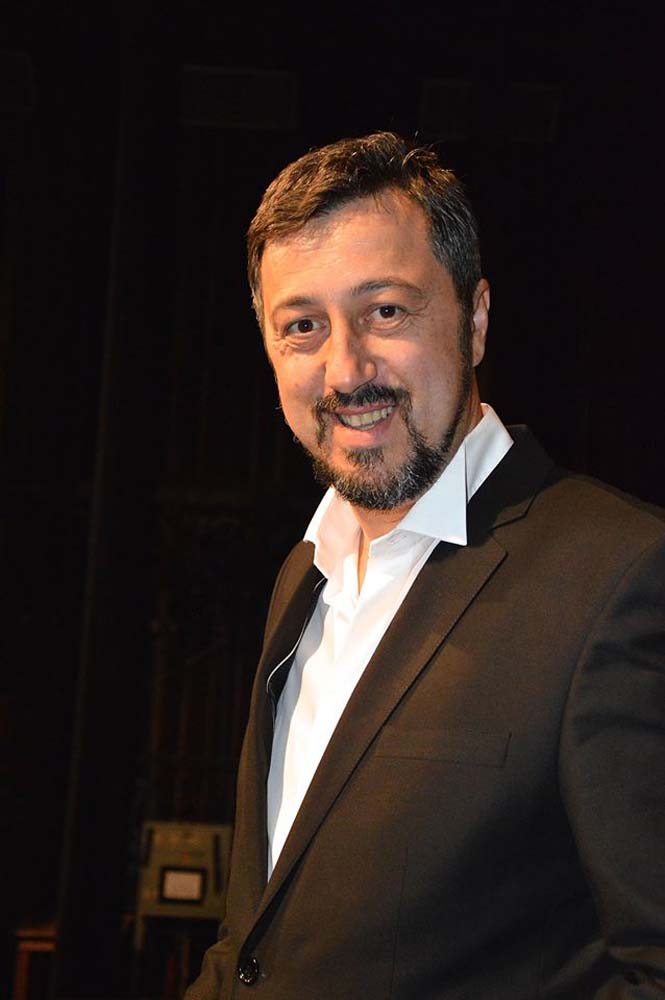