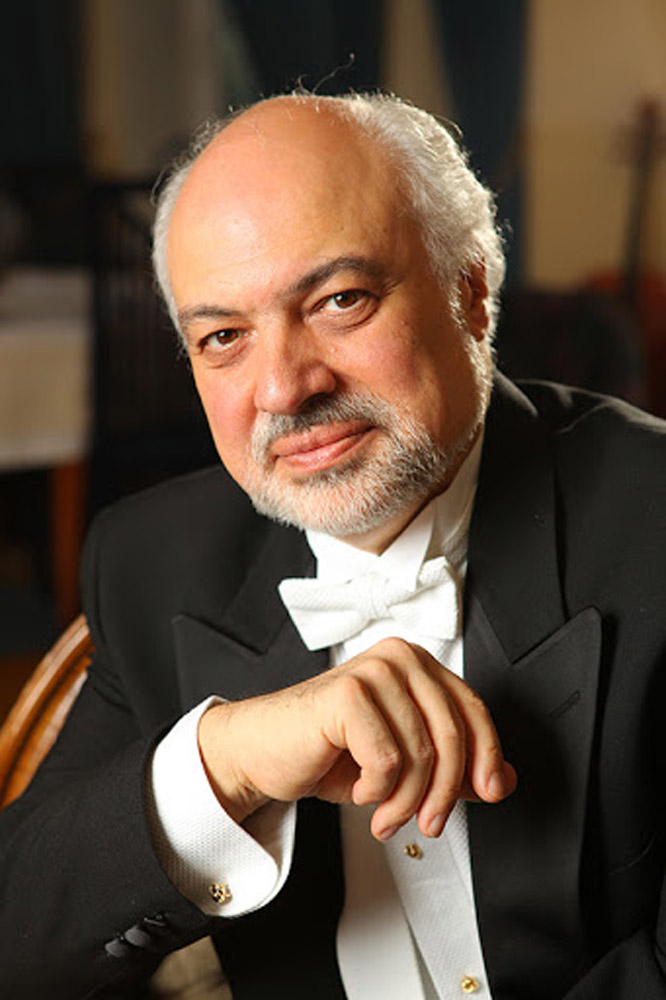 “Constantine Orbelian stands astride two great societies, and finds and promotes synergistic harmony from the best of each.”(Fanfare)  For over 25 years the brilliant American pianist /conductor has been a central figure in Russia’s musical life — as Music Director of the Moscow Chamber Orchestra and the Philharmonia of Russia, and as frequent guest conductor with other illustrious Russian orchestras. He toured with American stars in Russian music centers, and Russian stars in North American music centers, and extended these splendid collaborations to tours in Europe, UK, Japan, Korea, and other music capitals throughout the world.

Orbelian’s appointment in 1991 as Music Director of the Moscow Chamber Orchestra was a breakthrough event: he is the first American ever to become music director of an ensemble in Russia. This “American in Moscow” is well known as a tireless champion of Russian-American cultural exchange and international ambassadorship through his worldwide tours. In January 2004, Orbelian was awarded the coveted title “Honored Artist of Russia,” a title never before bestowed on a non-Russian citizen.

“Orbelian has star quality, and his orchestra plays with passion and precision,” The Audio Critic wrote of his acclaimed series of over 30 recordings on Delos. Among his concert and televised appearances are collaborations with stars Ewa Podles, Sondra Radwanovsky, Lawrence Brownlee, Renée Fleming and Dmitri Hvorostovsky, and with Van Cliburn in Cliburn's sentimental return to Moscow. Opera News calls Orbelian “the singer’s dream collaborator,”and commented that he conducts vocal repertoire “with the sensitivity of a lieder pianist.” Orbelian’s frequent collaborations with Hvorostovsky include repertoire from their Delos recordings “Where Are You, My Brothers?” and "Moscow Nights," featured on many tours and telecasts, including historic live telecasts from Moscow’s Red Square, and also appearances in Hvorostovsky’s annual series of concerts “Hvorostovsky and friends” in Moscow and St.Petersburg. He was also the conductor of another historic Red Square performance of two world opera starts – Dmitri Hvorostovsky and Anna Netrebko – in June 2013.

Born in San Francisco to Russian and Armenian emigré parents, Constantine Orbelian made his debut as a piano prodigy with the San Francisco Symphony at the age of 11. After graduating from Juilliard in New York, he embarked on a career as a piano virtuoso that included appearances with major symphony orchestras throughout the U.S., U.K., Europe, and Russia. His recording of the Khachaturian piano concerto with conductor Neeme Järvi won “Best Concerto Recording of the Year” award in the United Kingdom.

Four  times Grammy Nominee in the category classical vocal/opera recording :
-    in 2014  for the recording of Rossini’s virtuoso arias performed by the American tenor Lawrence Brownlee with the Kaunas City Symphony Orchestra (Lithuania) under Constantine Orbelian. It was a remarkable event both for the conductor and the orchestra which he had led since 2013;
-     in 2017 for the recording of “Russia cast Adrift” vocal cycle with the great Dmitri Hvorostovsky and St.Petersburg Symphony orchestra under Constantine Orbelian;
-    in 2018 for the best opera recording: Verdi’s Rigoletto with the great Dmitri Hvorostovsky and the Kaunas Symphony Orchestra;
-    in 2019 for classical arias recording with the American tenor Stephen Costello and the Kaunas Symphony orchestra.
Orbelian’s recordings have also received six ICMA (International Classical Music Award) nominations between 2014 and 2020.

In 2001 Orbelian was awarded the Ellis Island Medal of Honor, an award given to immigrants, or children of immigrants, who have made outstanding contributions to the United States. In 2012 he was awarded the Order of Friendship by Russia in recognition of his contribution to promoting Russian culture in and outside the country, and in 2015 – the Order of Friendship by Republic of Armenia.
In November 2017 he received a very special “Concord” prize from the Union of Armenians as the “Pride of the Nation”.

In June 2016 Constantine Orbelian was appointed Artistic Director of the A.Spendiaryan National Opera and Ballet Theatre of Armenia, and in 2017 became its General Director.

CD's and DVD's on Delos